A few weeks ago on a Saturday afternoon, I decided to host a Stuffed Animal Pet Show at my library for all ages. It was a lot of prep beforehand and a bit of a learning experience though overall, I would call it a success.

I required registration for this program so that I would know how much of the craft/snack items I should prepare. Thirty-six children registered for the program and 25 showed up. The entire program took about an hour.

As the children came in with their pets, I wrote down their name/pet's name on a registration sheet. Then I gave the child a sticky name tag with a number on it and their pet received a cardstock tag/safety pin with that corresponding number. The hope was that I was preventing any stuffed pet/child mix-ups. 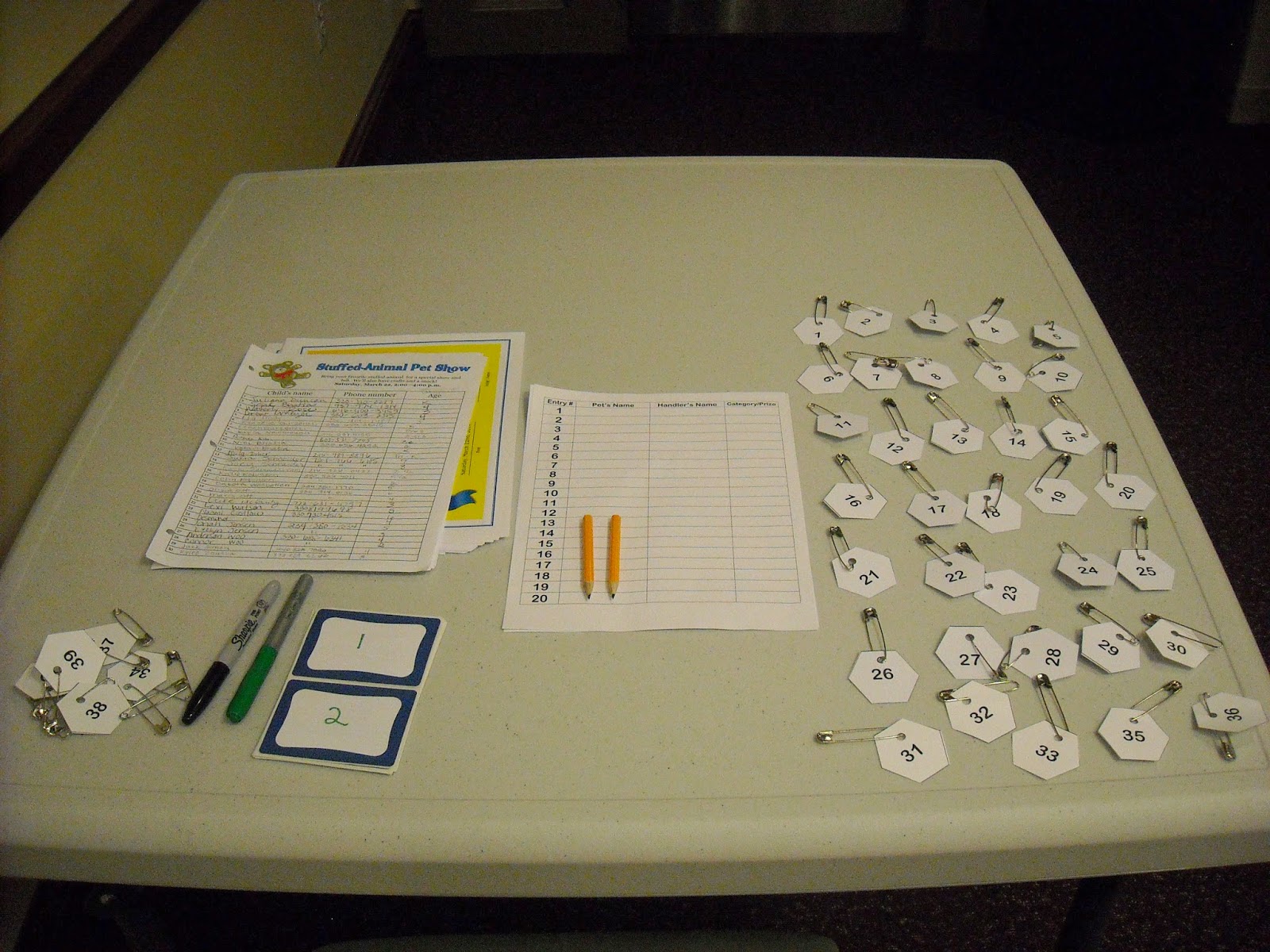 Then I directed them to the 3 different craft stations: 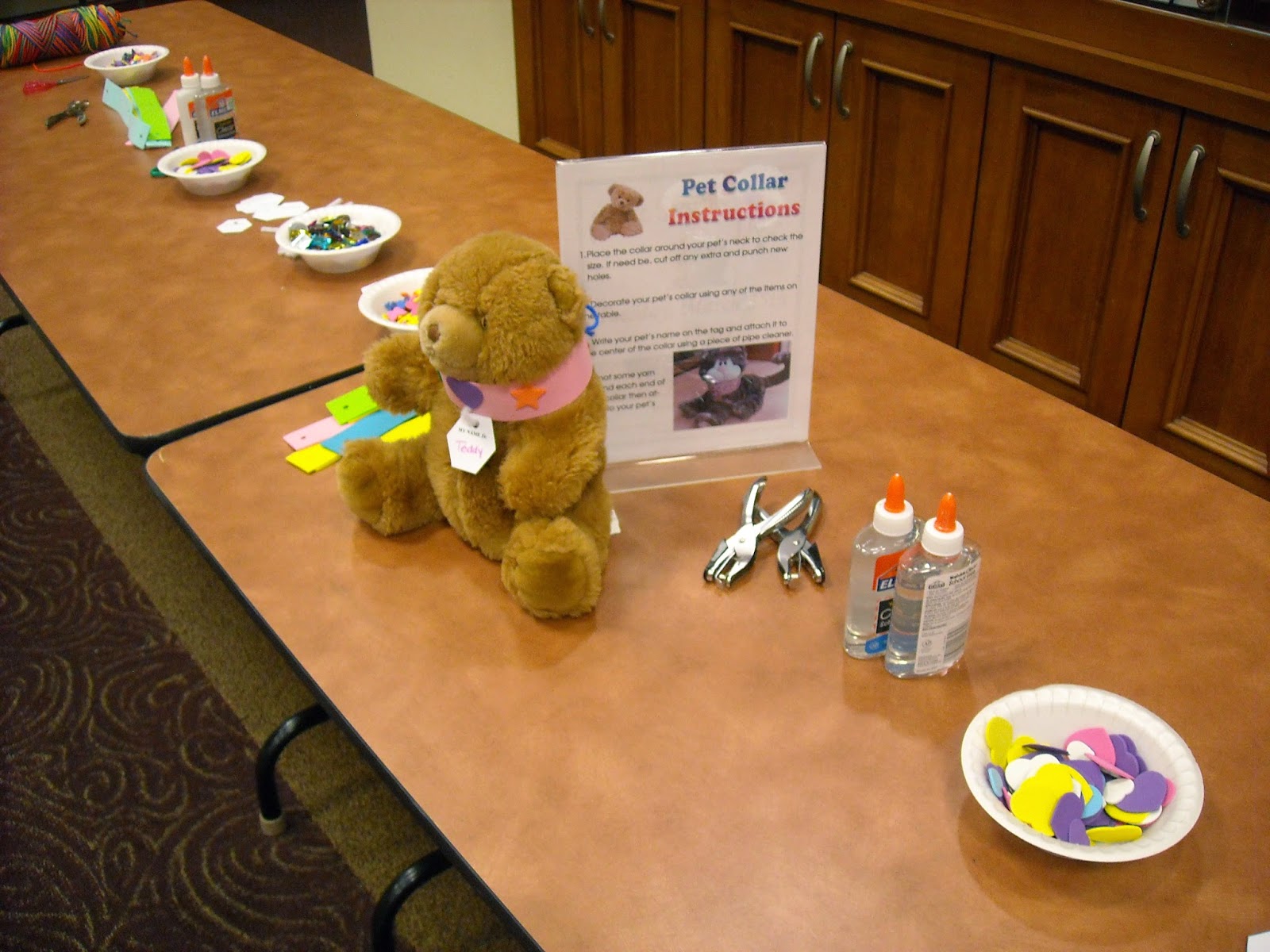 1. Pet Collar Craft: I cut out collars from 9" x 12" craft foam sheets ahead of time. My collars were 9" long and 1 1/2" wide which seemed to be a good size for most of the stuffed animals. I also pre hole-punched them for the tag and yarn ties. But just in case, I left out safety scissors and hole punches on the tables so that the parents could alter the size of the collar as needed. 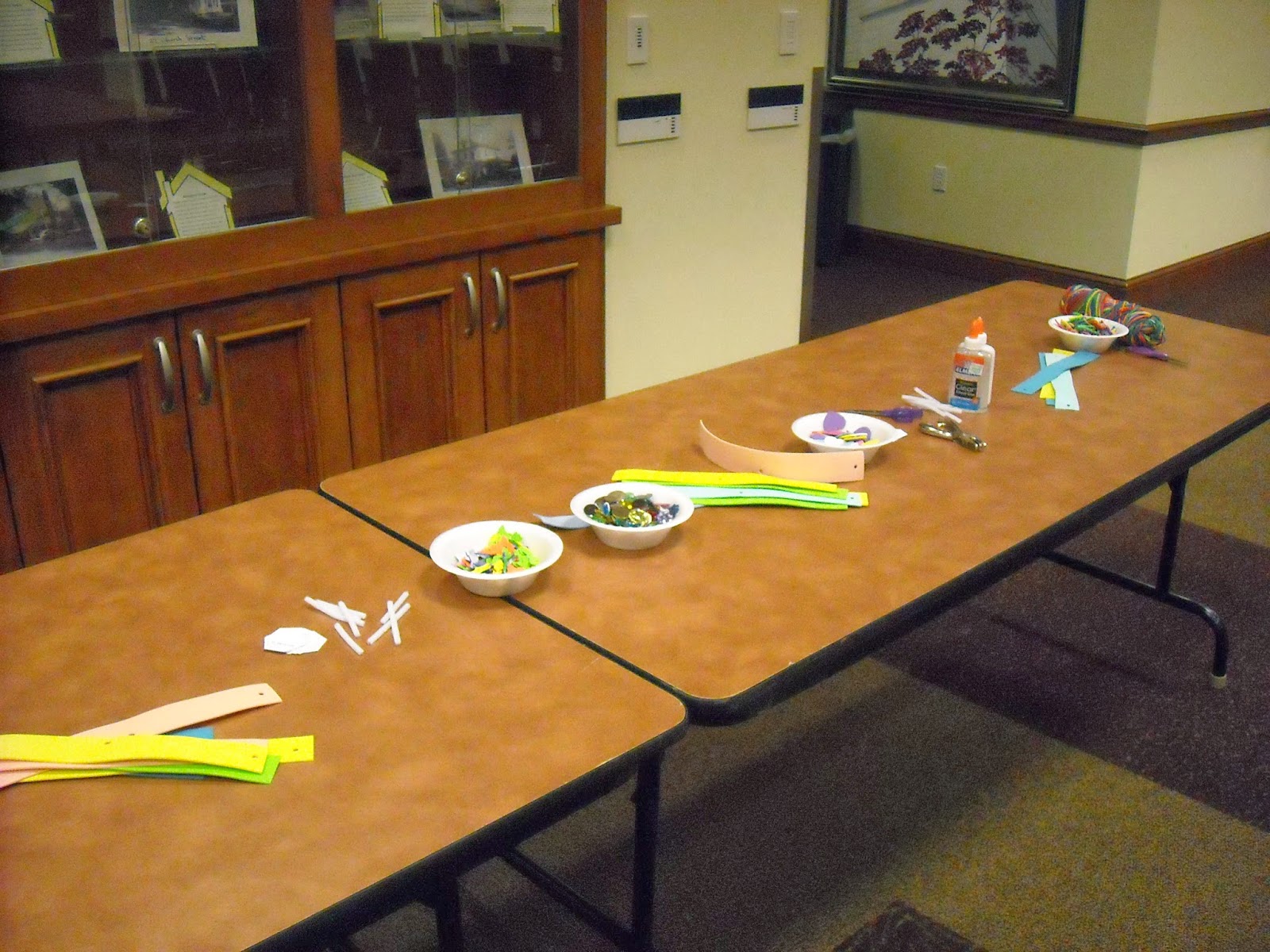 I set out foam stickers, jewels, and glue to decorate the collars. I also printed out hexagonal name tags/pipe cleaner pieces/markers for the kids to attach to the collar.

2. Grooming Station: I went to the Dollar Store and purchased cheap comb/mirror sets and several different kinds of hair accessories. The kids could stop here and make their pets runway ready before the show. This station was a big hit and some of them literally loaded up their pets with accessories! 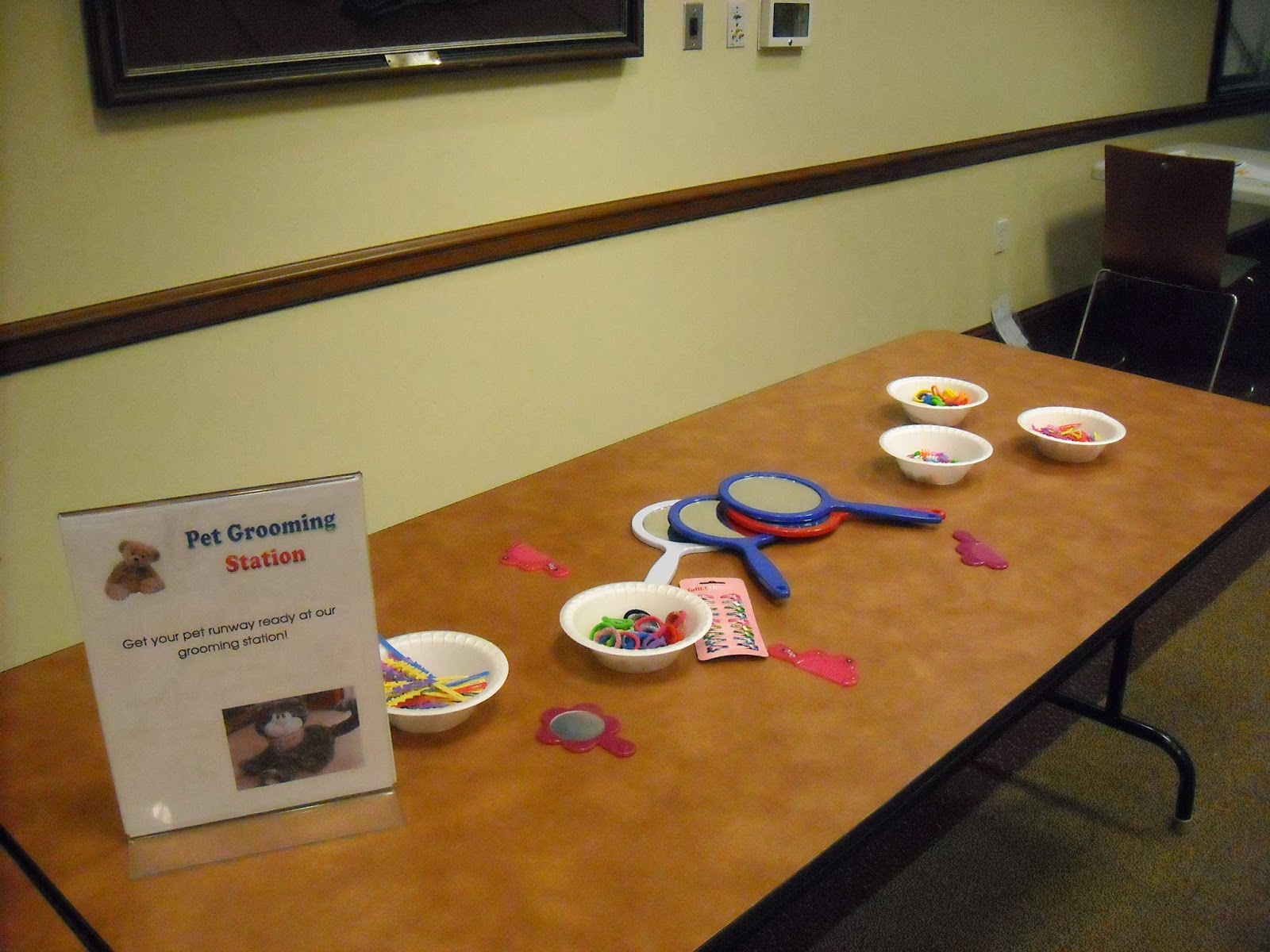 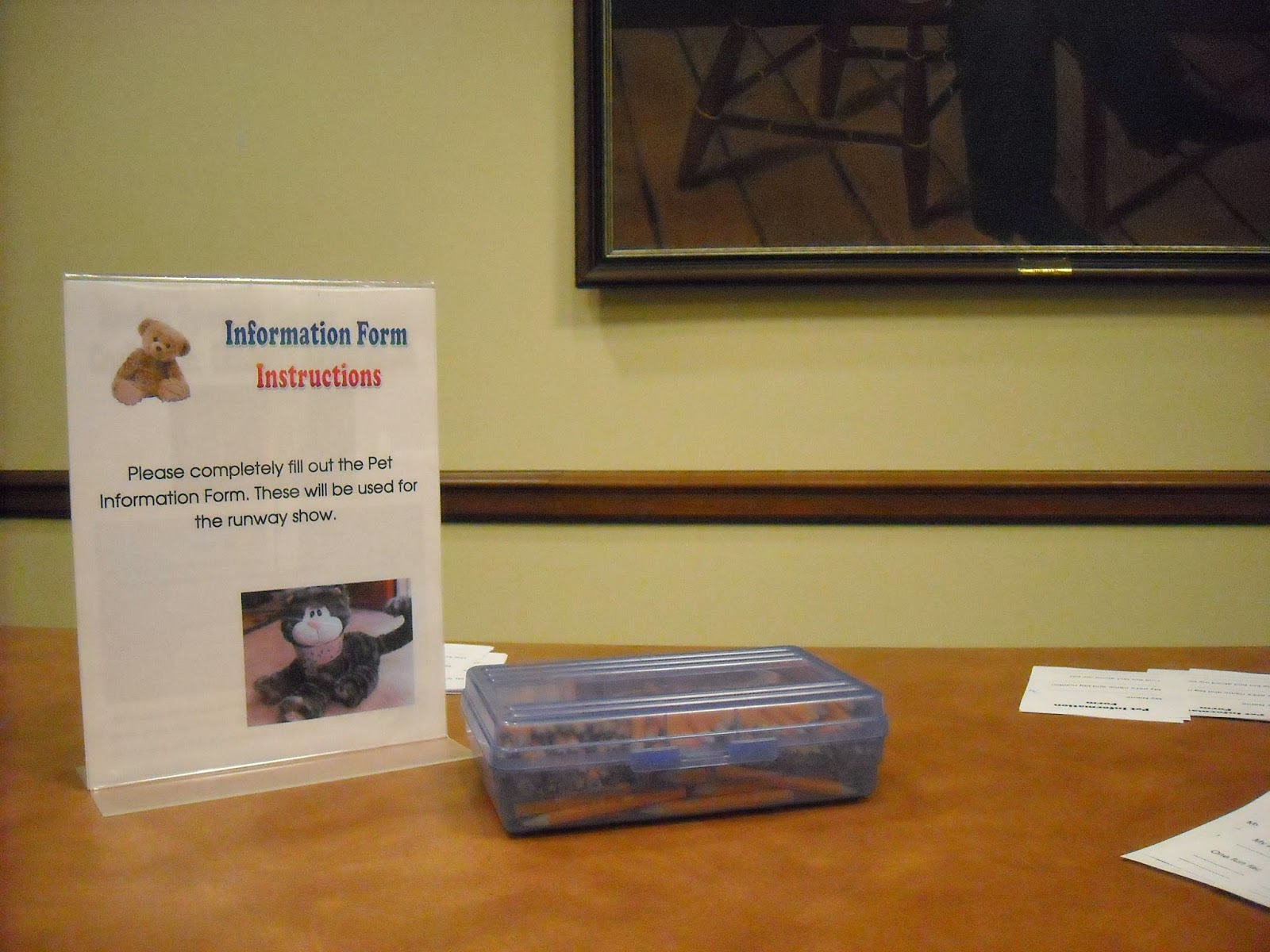 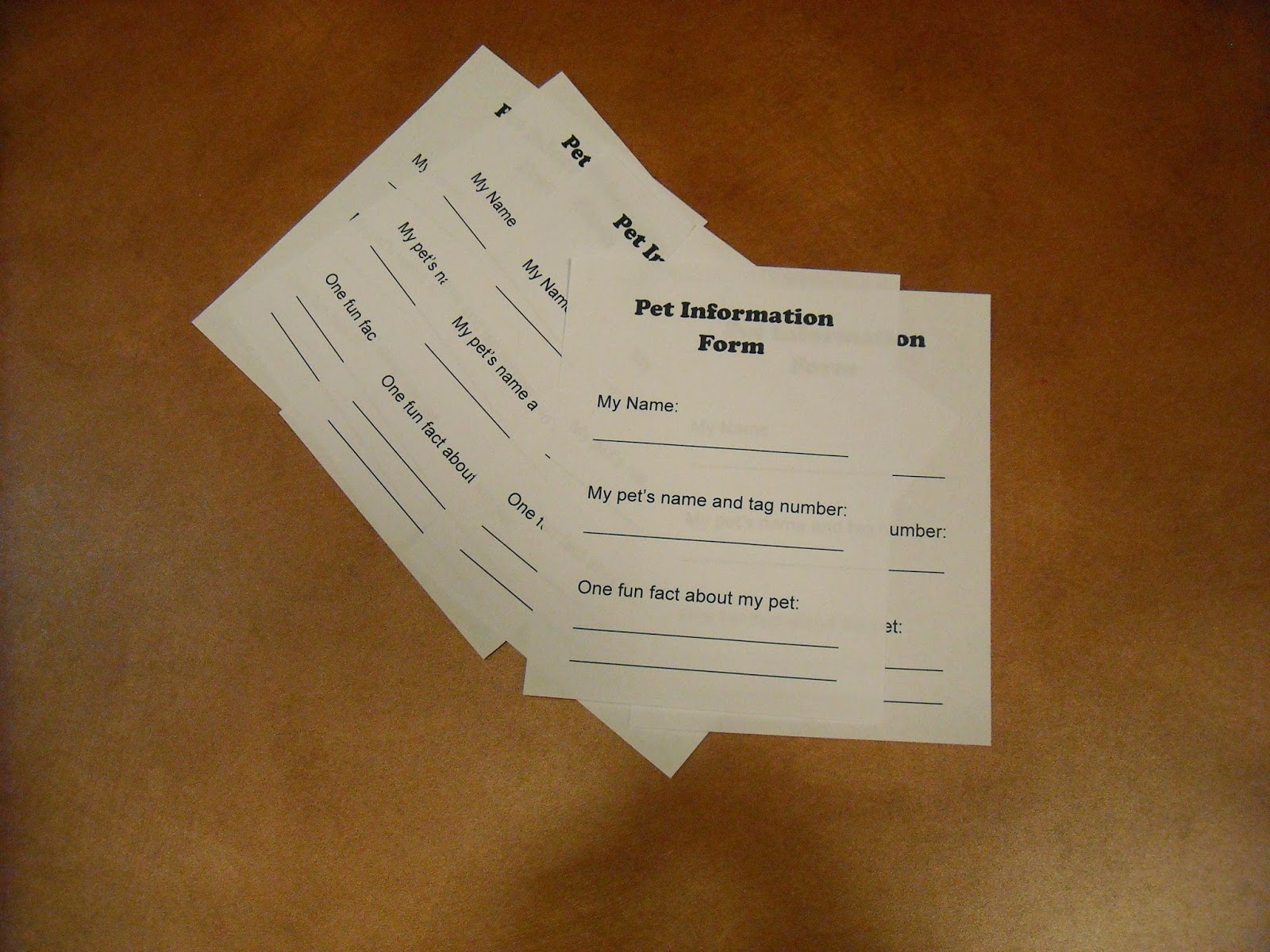 After about 30 minutes of doing the crafts, I gathered all the kids to the center of the room to dance along to the song "Dance With Your Teddy Bear" by Greg & Steve from Jumpin' and Jammin'.


Then it was time for the runway show! I had set up half of the room with rows of chairs and a runway area. I had the families take a seat here and called them up by number (i.e. kids with the number 1 through 10). I put on some Kidz Bop music in the background to dance down the runway to and I used a microphone to announce the child, pet, and the fun fact about the pet as they strutted down the aisle. I found that most kids just ran down the aisle instead of strut, so it was difficult to get good photos of this portion of the program! I also didn't force any child to walk the runway that didn't want to. 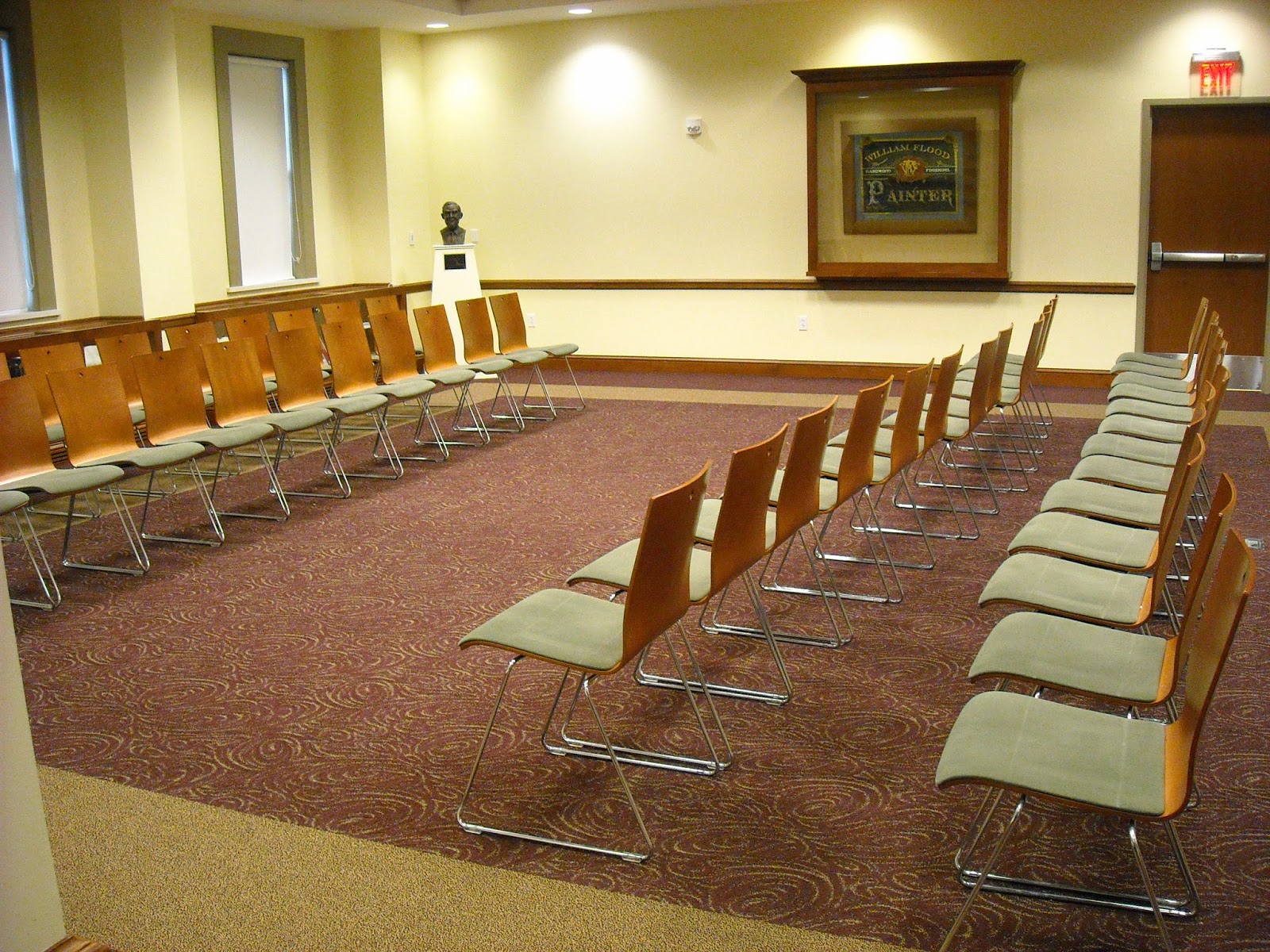 After the runway show, it was time for me to make up the certificates. While I was doing that, I had 2 different stations: cookie decorating and a coloring sheet.

I found a cute paw print cookie cutter on Amazon and decided to make homemade sugar cookies. Next time, I would probably use a smaller cookie cutter and I had to make 50 cookies and therefore when through a LOT of dough! 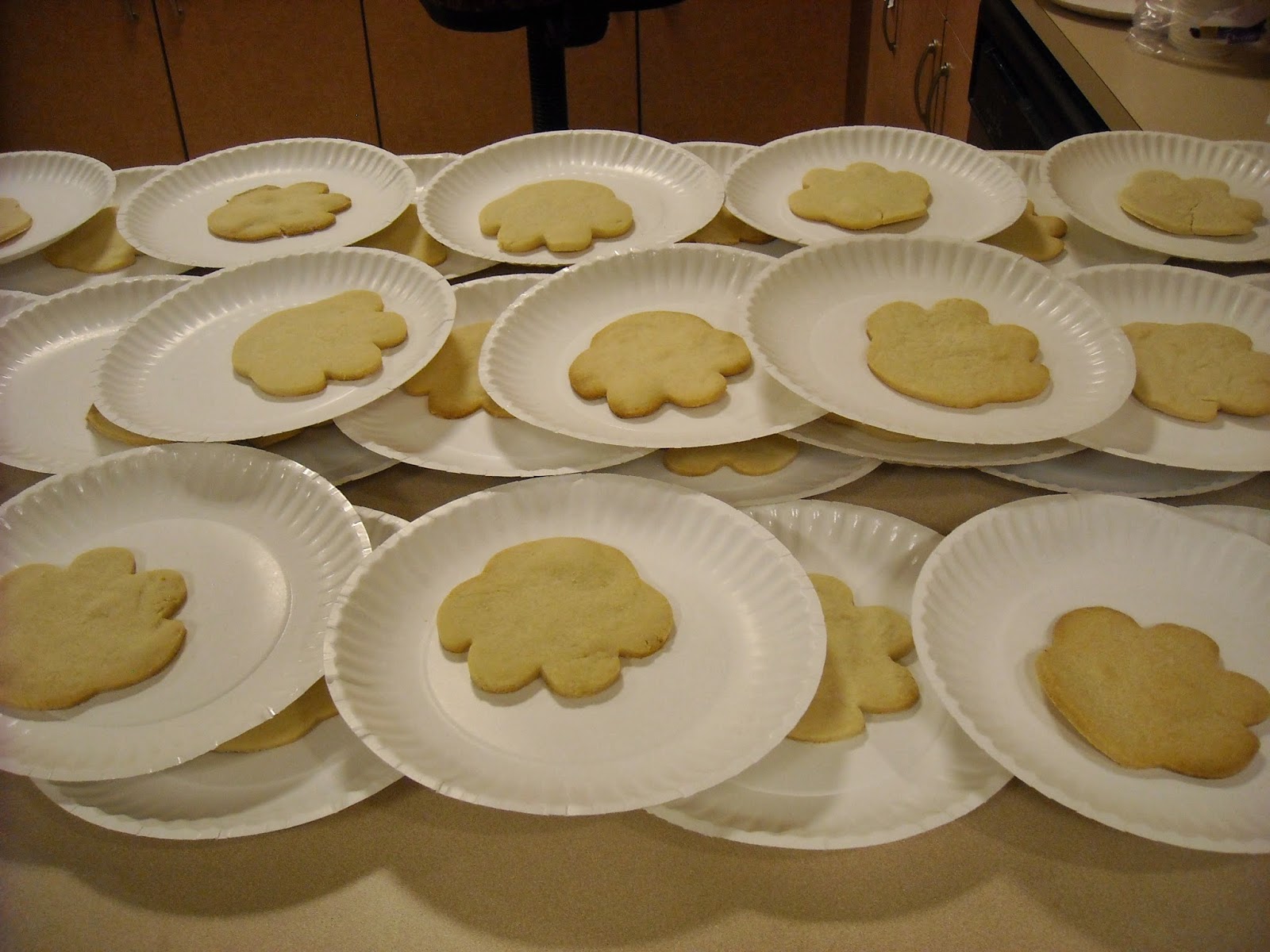 As each child picked up a cookie, they took it over to the decorating station where I had orange, yellow, and blue icing and sprinkles. I also provided apple juice for a beverage in a small attempt to make the snack healthy.

Then if they finished their snack early they could go color a teddy bear coloring sheet that I found online.

For the certificates, I made sure that each child's pet won in a certain category. I made up my certificate on Publisher. 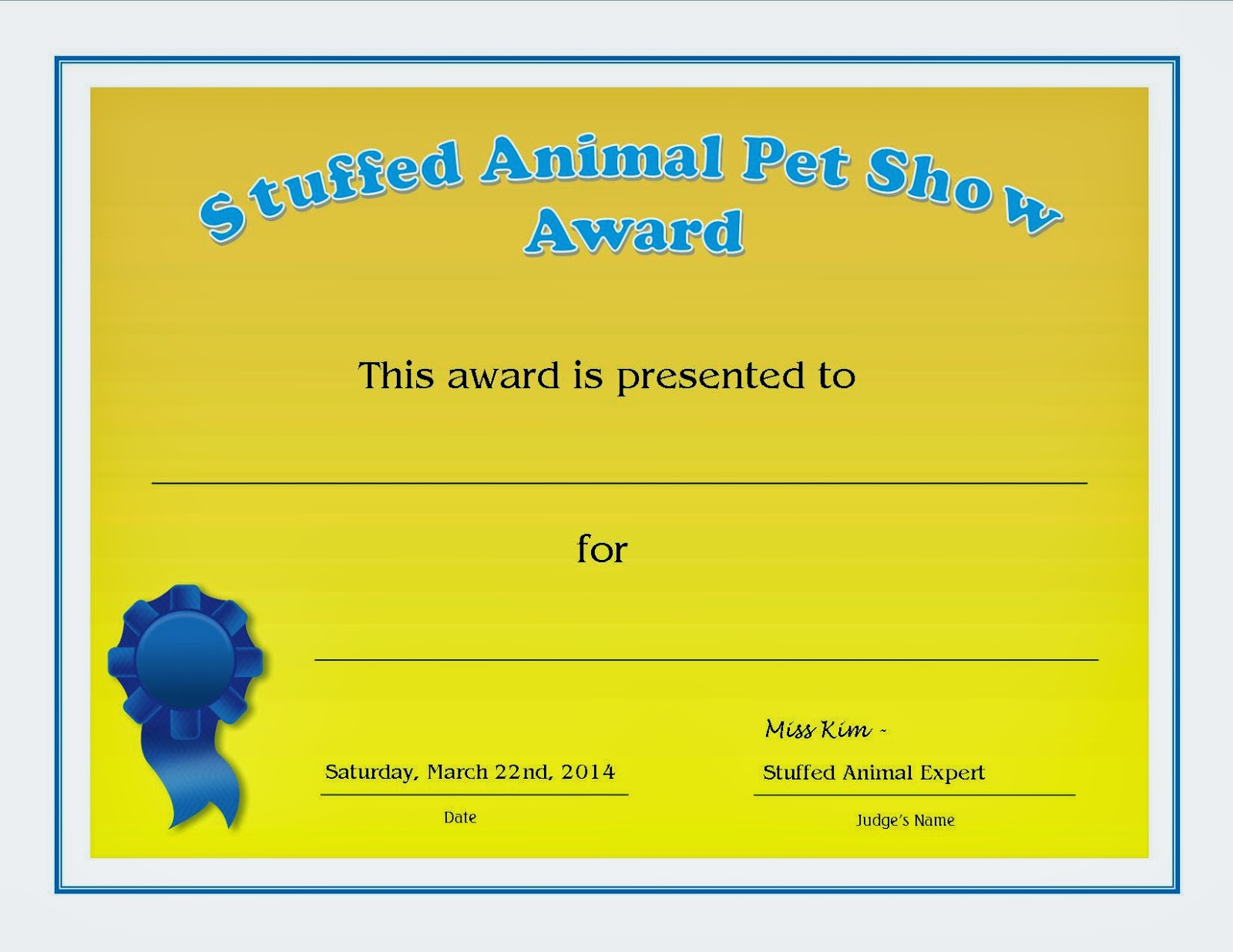 Here are some of the categories. I had some written out ahead of time, but most I made up on the spot as I saw the variety of pets:

After I had written out all of the certificates, I called everyone over to announce the winners. As I called them up, I handed them their pet/certificate and everyone applauded. The kids really seemed to enjoy this part.

What I Would Do Differently:

While the kids/parents all seemed to have a good time, it was my first time doing this program so it was a learning experience for me.

1. The next time I would have another staff member with me the entire program. For most of the time, it was just me and the families and I wished I would have had another set of hands to help me. I would have had them help with the cookie decorating while I wrote out certificates and maybe take photos of the kids/pets as they received them.

2. I would also maybe have a second involved craft, like the collars, at the beginning. I found a lot of families were done with the crafts not too far into the program and I slightly worried about them becoming bored.

3. I had the kids line up their pets on the floor along the wall for me after the runway show so I could make up the certificates. What I found was that a lot of the kids wanted to sit there to enjoy their cookies and got a bit in my way as I was crawling around on the floor. The next time, I would set up tables for the stuffed pets to be displayed instead.

When I do storytime, I love incorporating lots of music/movement/dancing. A few years ago, I attended a local youth services workshop where another librarian spoke about a Rock 'n Roll storytime that she does. It sounded right up my alley and something that I've been wanting to do since then. I finally got my chance a couple of weeks ago and this is what I did:

I hosted 3 different sessions over the course of one day for ages 18 months and up - 9:30 a.m., 11:00 a.m., and 1:15 p.m. I figured these would be good choices since they are the times of our regular storytimes and so our parents were already accustomed to them. I also chose to do this program in between our normal storytime sessions so that it wouldn't overlap or conflict with them.

I loosely planned my books/songs/rhymes until I saw the average age group on the registration sheets. I found that I had mostly toddlers in the morning sessions and preschoolers in the afternoon session, so I broke up my storytime into two different plans.

Opening Song: "If You're Happy and You Know It..."

Wiggles Song: "Shake Your Sillies Out" by Raffi (w/ CD)

Book: The Wheels on the Bus by Jane Cabrera

Book: From Head to Toe by Eric Carle

I also blew bubbles during this song while the kids waved their scarves in the air.

Opening Song: "If You're Happy and You Know It..."

Wiggles Song: "Shake Your Sillies Out" by Raffi (w/ CD)

Book: The Seals on the Bus by Lenny Hort 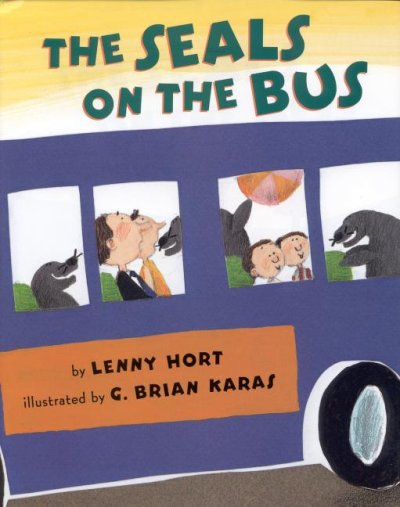 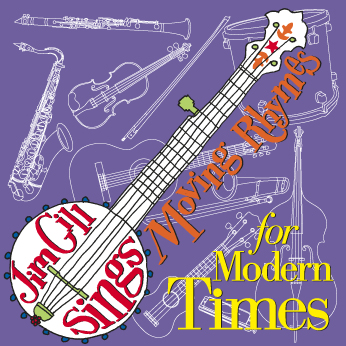 Book: Can You Make a Scary Face?  by Jan Thomas 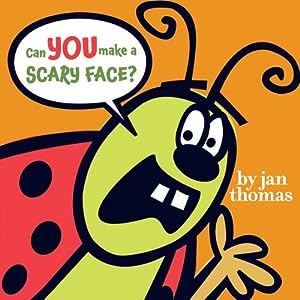 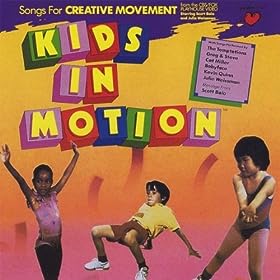 I also blew bubbles during this song while the kids waved their scarves in the air.

Overall, all of the sessions went well. The kids seemed to have a lot of fun moving and dancing. One caveat: in my mind, doing "Somewhere Over the Rainbow" with scarves and bubbles sounded like a nice, peaceful activity. However, I found that most of the kids just wanted to run around to catch the bubbles and swat at them with the scarves. It was more "toddler mosh pit" than anything.

Have you ever done a Rock 'n Roll Storytime? What did you do similar/differently?

Roar! A Noisy Counting Book by Pamela Duncan Edwards - This one is great for participation. The kids just LOVED roaring!
Jazzy in the Jungle by Lucy Cousins
We're Roaming in the Rainforest by Laurie Krebs 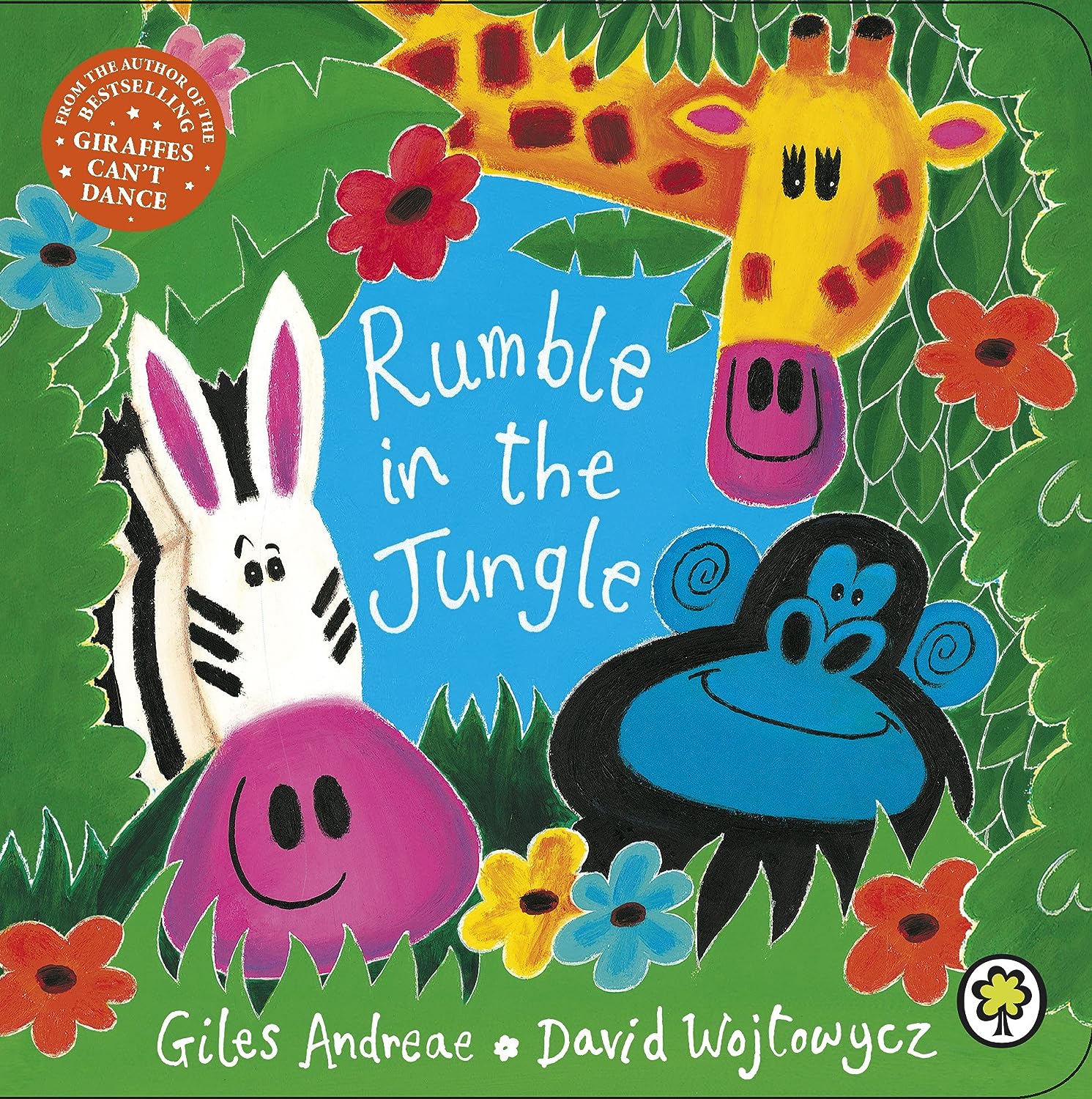 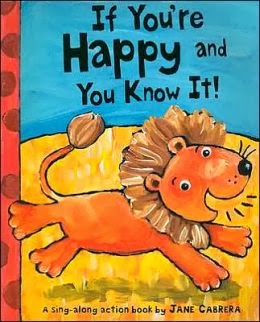 "I Went to the Jungle One Day” (I did this song with puppets)
(Tune: London Bridges)

I went to the jungle on day,
Jungle one day, jungle one day.
I saw a lion on the way
And this is what he said, “ROAR!”

Five little monkeys swinging from a tree (hold up 5 fingers and swing hand)
Teasing Mr. Alligator, "Can't catch me!" (wave hands next to temple for teasing motion)
Along came Mr. Alligator quiet as can be (make small, quiet "chomping" motion with hands)
And SNAPPED that monkey right out of the tree! (make big clapping motion on "SNAPPED")

Monkey see, monkey do
Little monkey at the zoo
Monkey, monkey in the tree
Can you ________ like me?
(jump around, swing your arms, scratch an itch, eat a banana, screech)

This one is super easy. I just found this pattern online and blew it up 175% on the copier onto cardstock. Then I cut out the elephants ahead of time and used a craft knife to cut an "x" in the middle of each nose. The kids just colored their elephants any way they wanted and then they got to pick a party blower to thread through the nose and make elephant sounds. This craft was a HUGE hit! 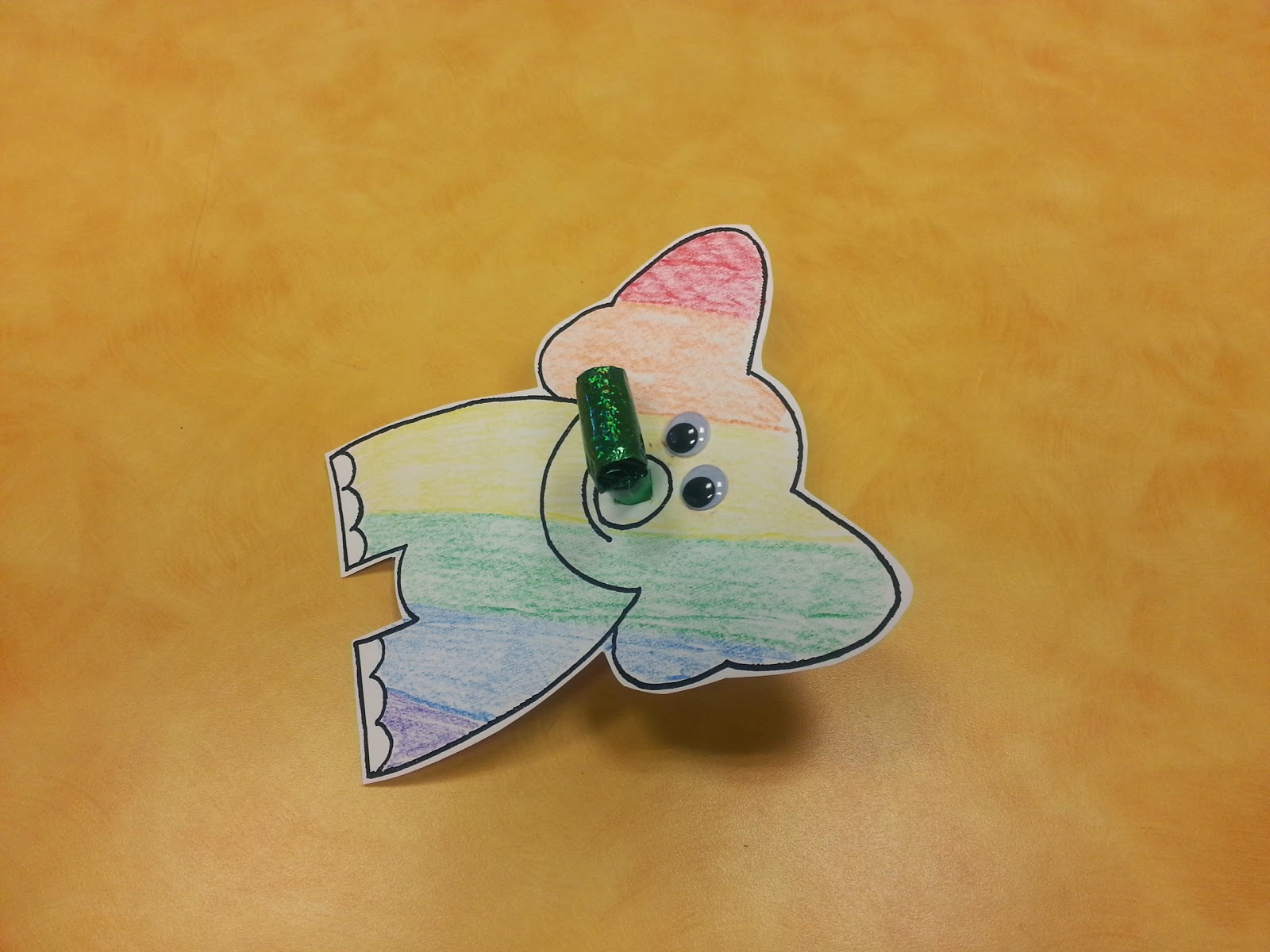 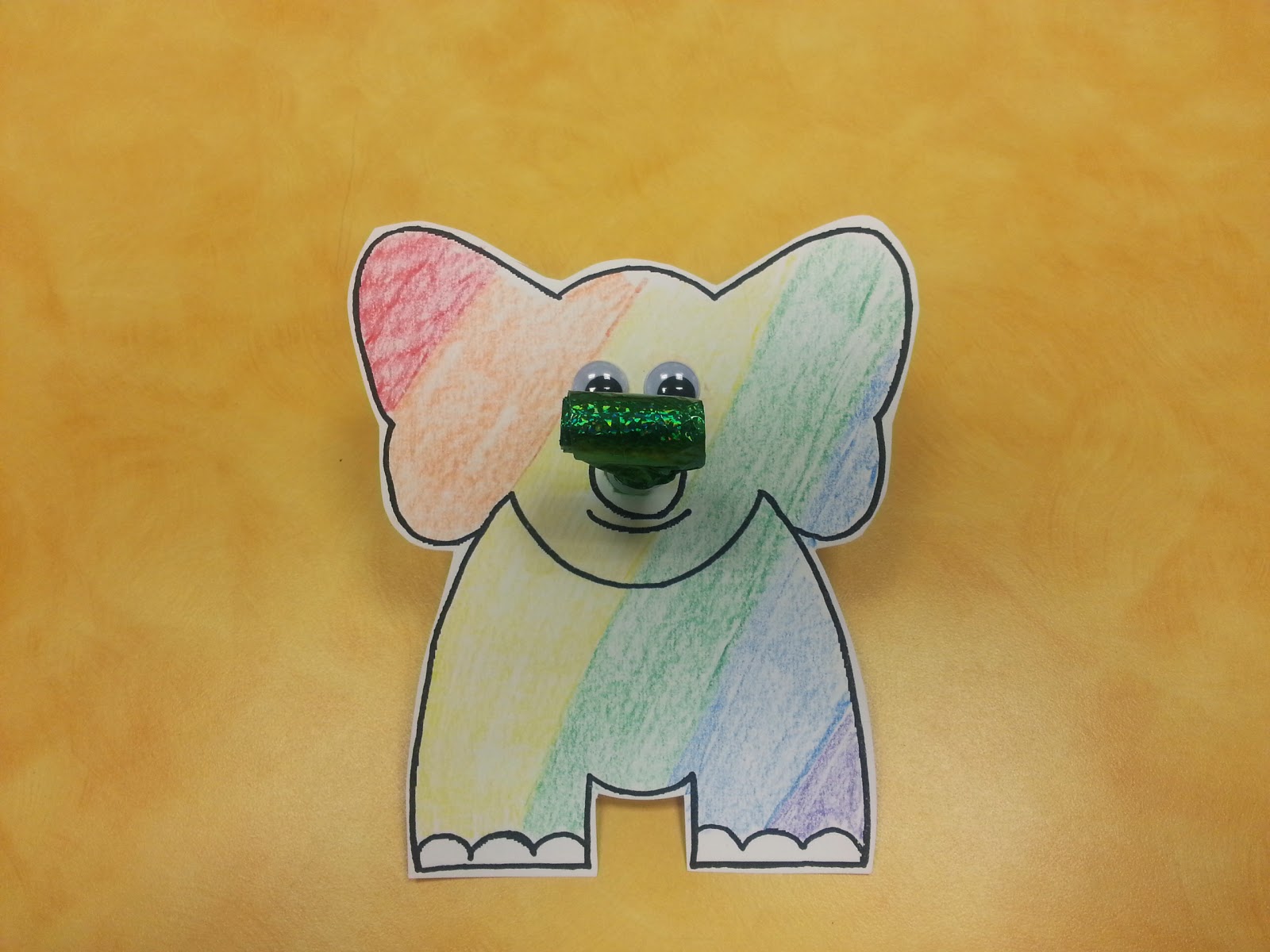 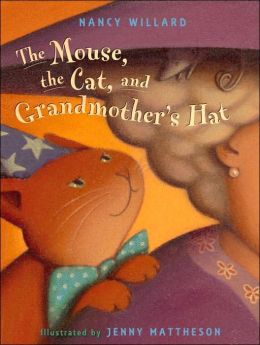 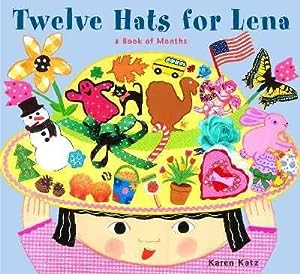 The Mouse, the Cat, and Grandmother's Hat by Nancy Willard
Twelve Hats for Lena by Karen Katz
Where's Mary's Hat? by Barroux

On my head, I wear my hat.
It is such a silly hat
That my head will wiggle waggle to and fro
Where else can my silly hat go?

For this flannel, I printed out clip art of different hats and a kitten from Microsoft Word. I hid the cat underneath one of the hats and let each of the kids try to guess where the kitten was hiding. I have a small group for one of my storytimes, so each child was able to have a couple of turns at guessing. If they guessed correctly, I had them cover their eyes and I hid the kitten again.

This craft was super easy and fun! I purchased paper bowls and plates from the grocery store. I just cut the middle out of the paper plates ahead of time. I had the parents tape the bowls to the plate "brims" but you could do this ahead of time as well. The kids then decorated the hats with stickers/crayons. 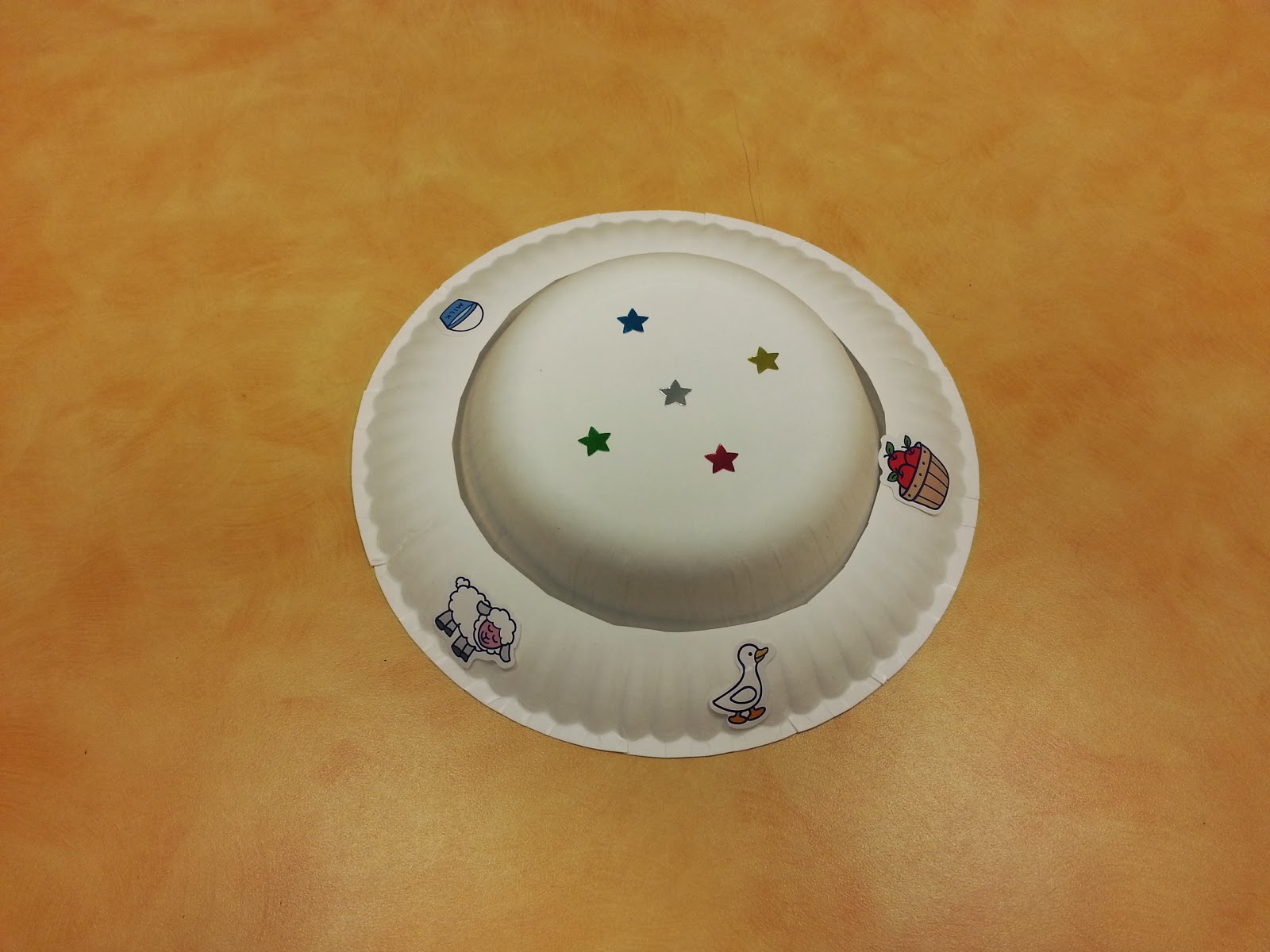 At our Anime Club meeting this past week, I decided to let the teens try their hand at Suminagashi (a.k.a paper marbling). Not only was it super easy to prepare for the program, but the teens had a blast! Here's how I did it:

I went to Amazon and purchased the following items:


Other items to have on hand:

After the teens arrived and settled in, I had them gather around a table so I could demonstrate how to drop the ink and dip the paper.

1. You should fill the tray with about 1 to 2" of water.
2. Take one of the ink colors and carefully squeeze a drop just on the surface of the water. You should notice the ink immediately spread out if it's done correctly.
3.  Continue adding drops of ink in your desired colors.
4. Use a straw to swirl the ink around.
5. Starting with one end of the rice paper, carefully dip the paper into the water to catch the ink.
6. Immediately but carefully remove the rice paper from the water and set on newspaper or a paper towel to dry.

Here's a link with more instructions.

That's it! Below are some photos of the teens' masterpieces. 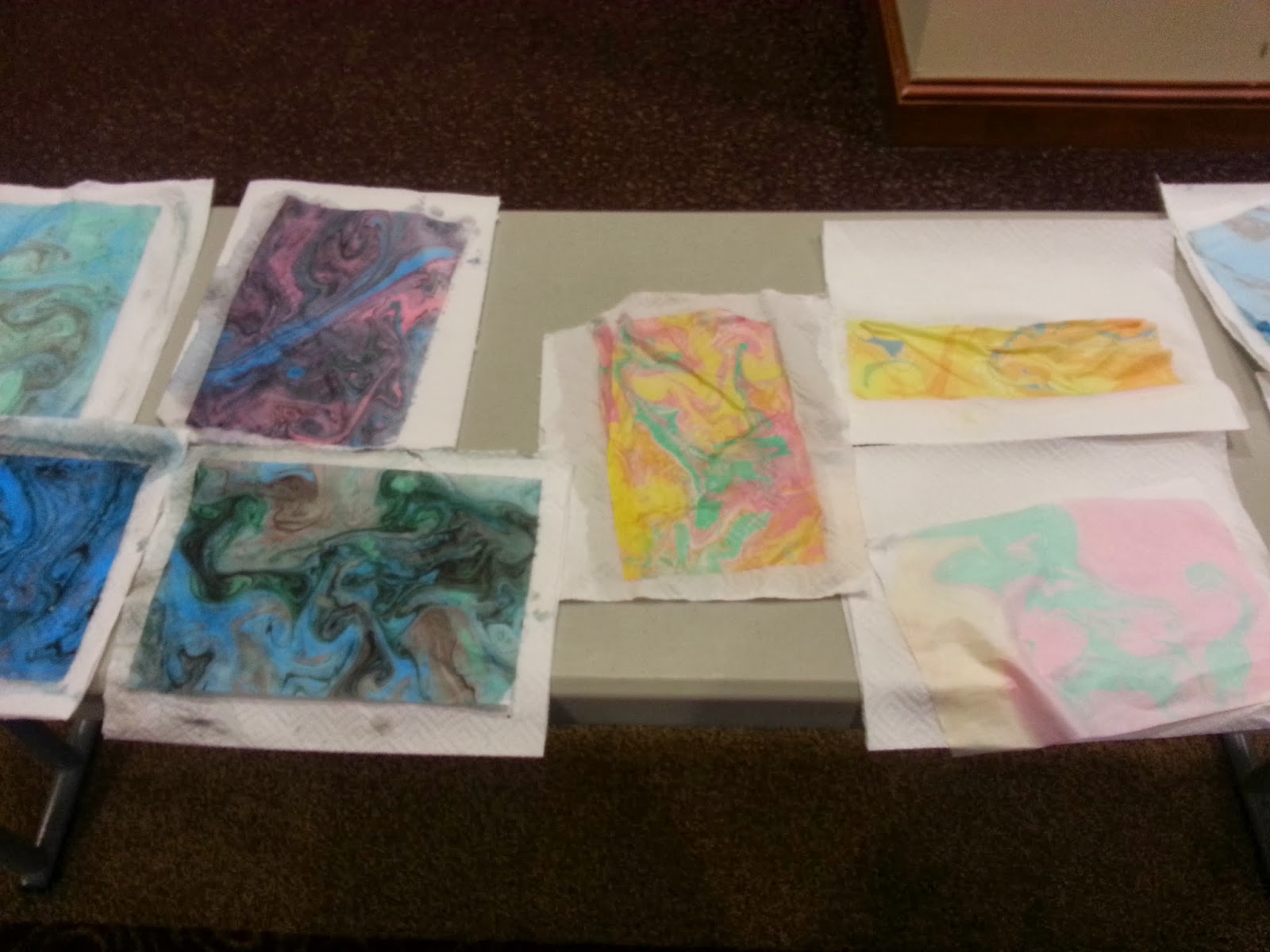 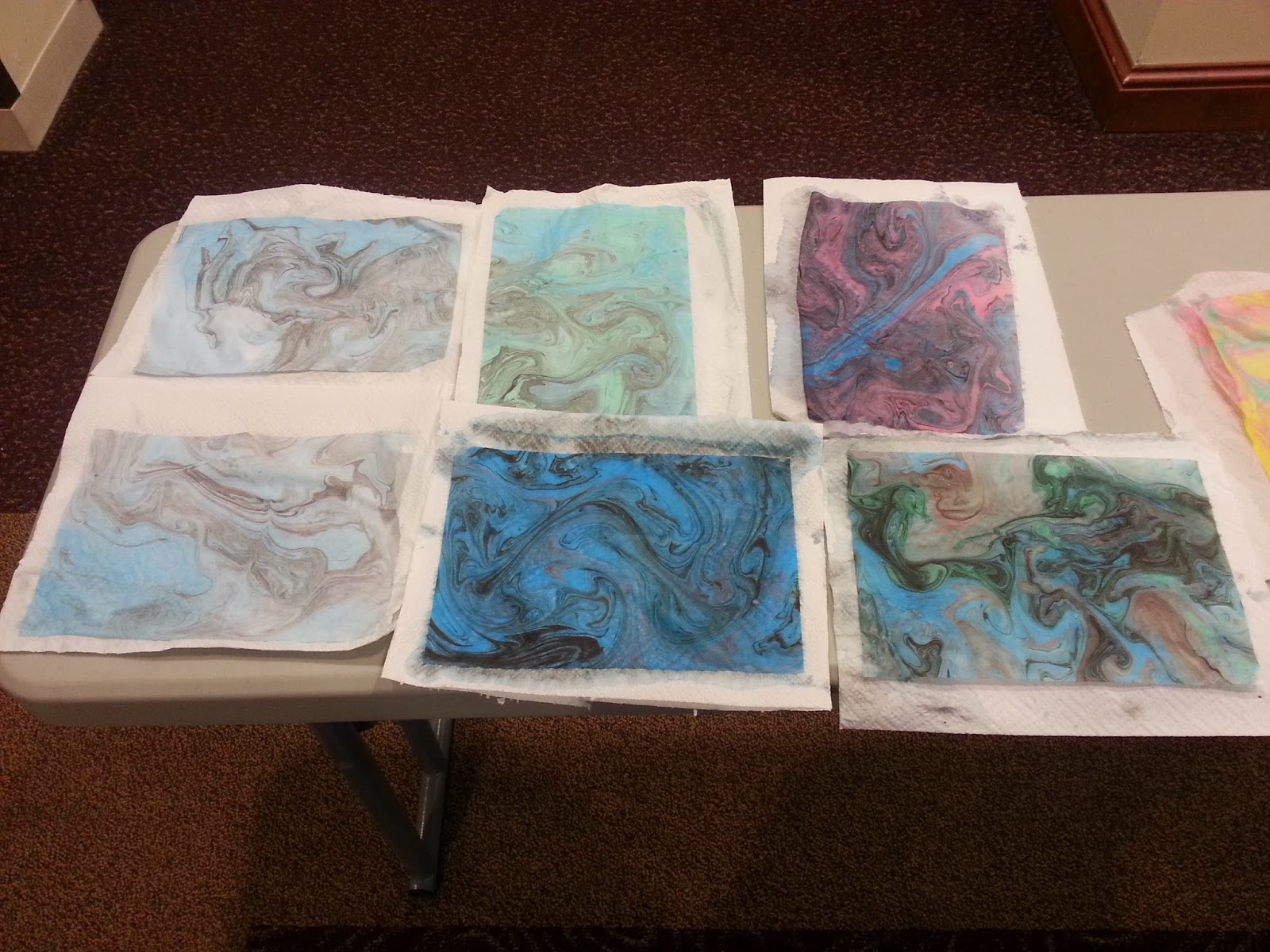