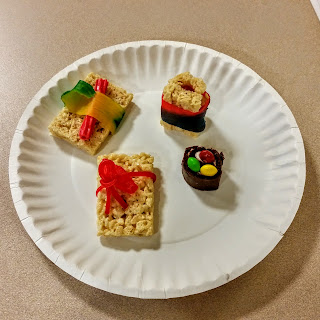 For our October anime club meeting, I wanted to do something candy-related. So I thought why not make some candy sushi! It's easy and the teens loved it.


To prep, I cut pre-packages Rice Krispies Treats in half and tore the Fruit by the Foot into strips. I made some examples ahead of time (see photo above) and set everything out buffet style. I included some more example photos that I had sitting at the tables for teens to get inspiration, but I told them that they could also create their own sushi design. 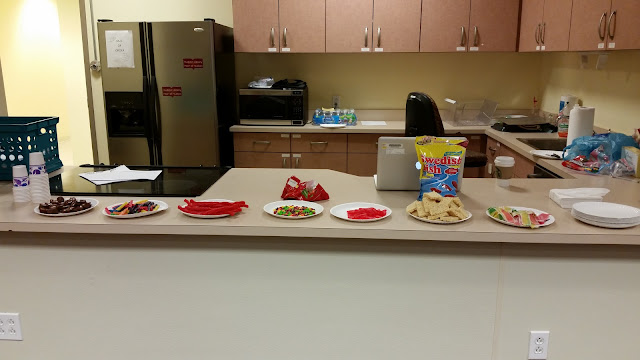 While this program was a little bit more expensive than others due to the cost of candy supplies, the prep/staff time was minimal. Overall, this activity was a hit and I would definitely do it again!
Posted by Kim at 4:19 PM No comments: Links to this post

Pizza and Pages: Ripper by Stefan Petrucha and Some Growing Pains As with most established, long-running programs, I found that my middle school book club was experiencing some growing pains. Most of the regular attendees were beginning to age out (the original grade range for the group was 6 to 9) but they still love coming and were just a really great group in general. Plus, the titles I was choosing starting becoming too "baby-ish" as their reading tastes diverged and it was hard to find something they would all like. They wanted to grittier, meatier reads that I just didn't feel comfortable giving to 11 year-old sixth graders.

So I decide to alter my book group and bit and turn it into a Teen Book Club for grades 7 to 12. The teens were really on board with this change and are excited to delve into some older teen books.

So to kick off our first new book club meeting of the school year, I decided to choose a fun, historical thriller and Ripper seemed to fit the bill.

Plot Summary: From Goodreads: "Carver Young dreams of becoming a detective, despite growing up in an orphanage with only crime novels to encourage him. But when he is adopted by Detective Hawking of the world famous Pinkerton Agency, Carver is given not only the chance to find his biological father, he finds himself smack in the middle of a real life investigation: tracking down a vicious serial killer who has thrown New York City into utter panic. When the case begins to unfold, however, it’s worse than he could have ever imagined, and his loyalty to Mr. Hawking and the Pinkertons comes into question. As the body count rises and the investigation becomes dire, Carver must decide where his true loyalty lies."

Average Teen Rating: 7.3
The teens really enjoyed this one.

Posted by Kim at 11:09 AM No comments: Links to this post