If you work with teens, you've probably also heard them fervently talk about Sherlock, The Walking Dead, Supernatural, Doctor Who, etc...and maybe you've even occasionally heard the words "Superwholock", fanfic, or flower crowns. These things and more can be found on a social networking/blogging site called Tumblr. It's become a massively popular platform for teens and young adults to create and share content, including fan art and fan fiction. There's even an entire Tumblr community of librarians (lovingly dubbed "Tumblarians").

Thus, my coworker and I hosted a Fandom Party for teens at the library this summer. We chose 5 different fandoms (Sherlock, Supernatural, Doctor Who, Divergent, and The Walking Dead) and created self-directed activities based around each one. 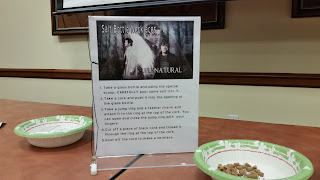 
Teens fill the bottle with salt, then close the top with a cork. They attach a jump ring/angel wing charm to the cork, then thread a piece of cotton cording through it. Knot off the cord and that's it! They now have a necklace capable of warding off evil spirits a la Sam and Dean. 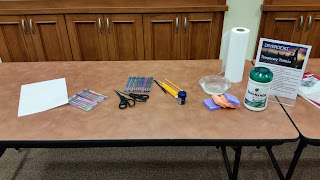 You Need:
Teens cut a piece of tracing paper. Then they sketched out a design using the pencil and traced over it using the gel pens (making sure to press firmly and using a LOT of gel ink). They placed the design ink side down where they wanted their tattoo to be and used a sponge/paper towel/wash cloth dipped in warm water to transfer the ink to their skin. The teens pressed firmly for 30 seconds, then lifted a corner of the paper to see if the tattoo transferred correctly. If not, they continued to press on the tattoo, then checked again. This was a pretty popular activity and I'm sure Tris would have been proud of their designs! 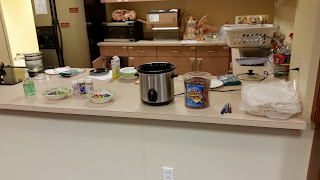 You Need:
The teens dipped a pretzel rod in chocolate, then used the sprinkles/candy to decorate. They then set the pretzels on a paper plate covered in wax paper to harden.

4. Pin the Mustache on Watson/Tea (Sherlock) 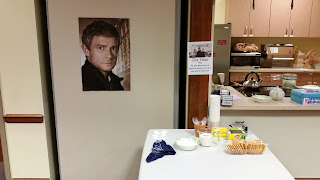 My coworker found a photo of John Watson on Google and printed it out in Publisher. We made it large enough so that we could just glue it to a piece of poster board. We then cut out mustaches and provided a blindfold so that the teens could play this Sherlockian version of Pin the Tail on the Donkey.

We also provided tea with milk. I didn't have the budget for it this year, but I've seen these awesome Fandom Teas that I want to purchase next time. 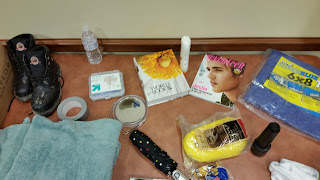 Most items were worth anywhere from 1 point (fashion magazine, mirror) to 5 points (plastic tarp/first aid kit). I had a package of Twinkies that were secretly worth 10 points. Only one team put that into their kit, which made them the obvious victors.

Near the end of the program, we gathered the teens together to test their fandom knowledge with a fun trivia game. We did it similarly to the trivia game we played at our Doctor Who Party.

More Helpful Stuff
Here are a some sites we used to help plan our program:

It's a Soup-er Garden! 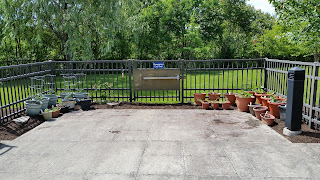 Every summer, I host a container garden program on our library's patio. This summer, since our theme for the reading program is superheroes, why not have a soup garden?

I ran the program similarly to the Butterfly Garden program last year where we had different activity stations:

1. Container Planting: I had enough plants/seeds on hand for each child to get to plant at least one. For the soup garden, we planted: 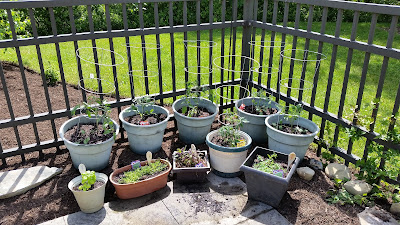 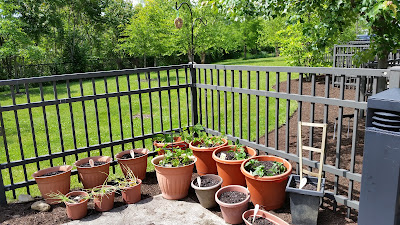 2. Rock Painting: Originally, I found this craft and desperately wanted to do it. But after reading the list of chemicals in ready-mix mortar and stepping stone mix (which are quite scary!) and after agonizing over other possible alternatives, I just decided to just let participants paint rocks that they could either take home or leave behind to decorate our library garden. I set a tarp down on the ground, filled some egg cartons with paint, and left the rest up to their imaginations! 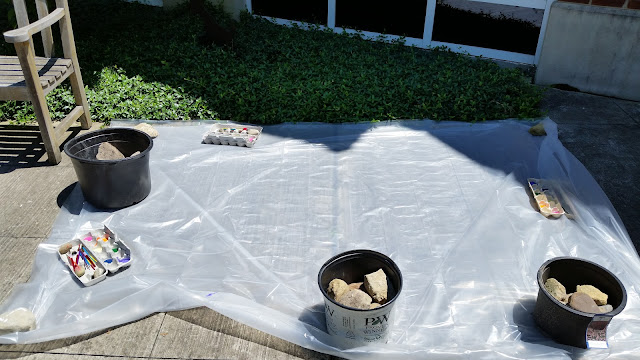 3. Bagel Bird Feeders: All you need for this craft are some plain bagels, ribbon, birdseed, and Sunflower Seed Spread (which is safe for both birds and peanut butter allergies). 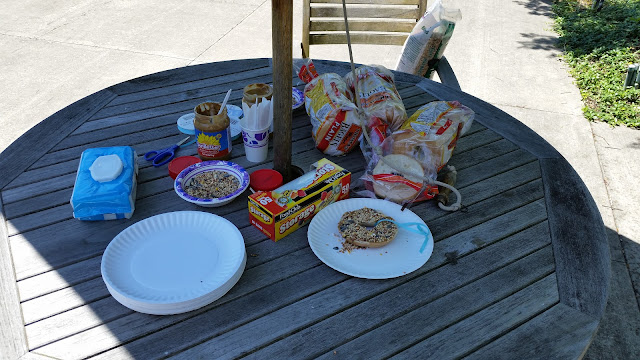 4. Plant Pals: Kids take a clear cup and decorate it with stickers or markers, add some potting soil, and sprinkle some grass seed on top. I found the stickers on Oriental Trading (nose and mouth stickers found here). 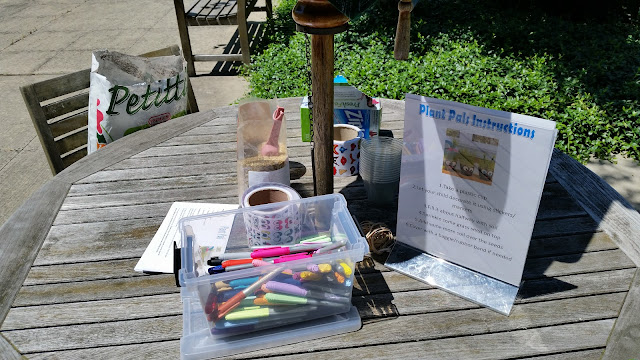 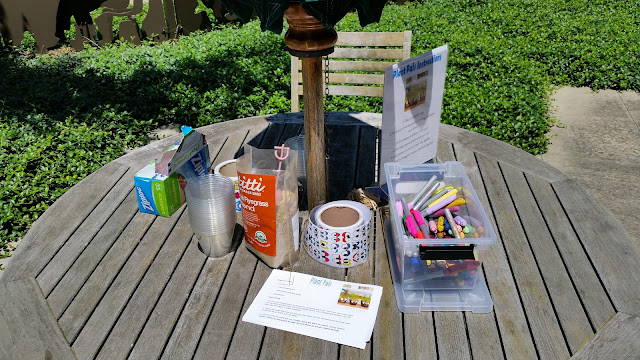 5. Snack/Story: As the families finished up with all of the activity stations, they could come over a get a snack. I provided grape tomatoes, baby carrots, celery sticks, and cucumber slices with ranch dip. (Note: the celery sticks were by far the least popular choice.) We also had cold glasses of water to drink. When the majority of them were having the snack, I read a story or two.

Here are some great choices when you need a vegetable-themed story: 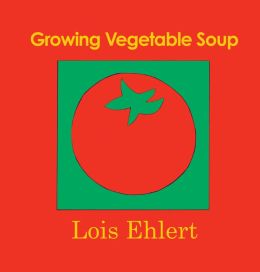 In August, the plan is to have a harvest day where families can take home some vegetables after we enjoy some gazpacho.

For more garden ideas, check out my gardening Pinterest board. Happy gardening!

Posted by Kim at 8:38 PM No comments: Links to this post