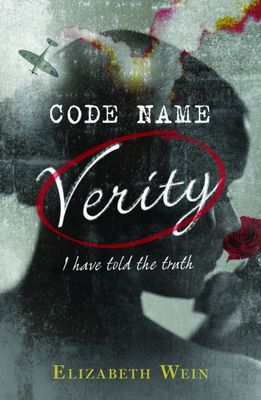 Plot Summary: From Goodreads: "II have two weeks. You'll shoot me at the end no matter what I do.
That's what you do to enemy agents. It's what we do to enemy agents. But I look at all the dark and twisted roads ahead and cooperation is the easy way out. Possibly the only way out for a girl caught red-handed doing dirty work like mine - and I will do anything, anything to avoid SS-Hauptsturmführer von Linden interrogating me again.He has said that I can have as much paper as I need. All I have to do is cough up everything I can remember about the British War Effort. And I'm going to. But the story of how I came to be here starts with my friend Maddie. She is the pilot who flew me into France - an Allied Invasion of Two.We are a sensational team."

Average Teen Rating: 8.13
The teens really liked this one. They loved the writing. I also printed out some photos and information about female fighter pilots/planes during World War II.

You can find some great discussion questions here, here, and here.
Posted by Kim at 12:54 PM No comments: Links to this post

Pizza and Pages: The Hobbit by J.R.R. Tolkien 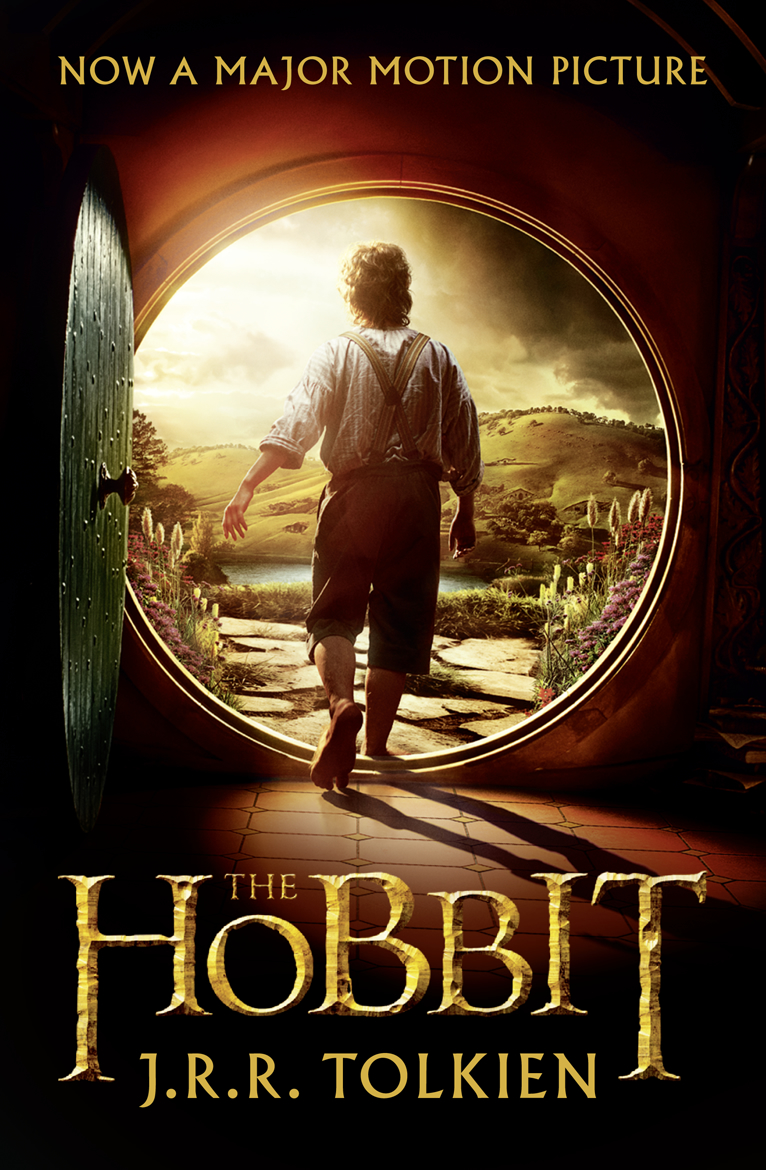 Plot Summary: From Goodreads: "In a hole in the ground there lived a hobbit. Not a nasty, dirty, wet hole, filled with the ends of worms and an oozy smell, nor yet a dry, bare, sandy hole with nothing in it to sit down on or to eat: it was a hobbit-hole, and that means comfort.

Written for J.R.R. Tolkien’s own children, The Hobbit met with instant critical acclaim when it was first published in 1937. Now recognized as a timeless classic, this introduction to the hobbit Bilbo Baggins, the wizard Gandalf, Gollum, and the spectacular world of Middle-earth recounts of the adventures of a reluctant hero, a powerful and dangerous ring, and the cruel dragon Smaug the Magnificent. The text in this 372-page paperback edition is based on that first published in Great Britain by Collins Modern Classics (1998), and includes a note on the text by Douglas A. Anderson (2001). Unforgettable!"


Average Teen Rating: 6.83
My teens had been asking for us to read this in book club for awhile. Most of them loved it, with just a couple saying that it was "too slow" for them. Reading this also sparked a big debate about the book vs. the films, which was highly entertaining!

There definitely wasn't a shortage of discussion guides for this title. I found some here, here, here, here, and here.
Posted by Kim at 12:47 PM No comments: Links to this post

By now, I've gotten a couple of 3D printing classes for teens under my belt. But I wanted to branch out to the tweens somehow and introduce them to this awesome technology. Thanks to School Library Journal, I got the idea to run a class for tweens (grades 3 to 5) using a program called Cookie Caster. 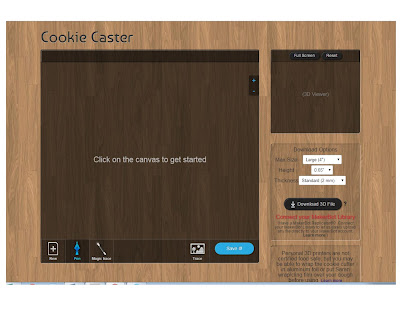 This program was super easy to run! Kids can create their own design either by using points (anchors) and lines to design something freehand, or by tracing an image from the web using a tool called Magic Trace. They can then preview their creations as a cookie cutter and download it as a .stl file for printing.


First, I showed the tweens our 3D printer. I had asked IT to have a cookie cutter printing at the start of class so that everyone could see what it looked like to print something. I quickly explained the basic parts of the printer and how the filament comes out to make a print. Then I passed around some cookie cutter examples that I had made ahead of time, so they could see what the filament felt like. I also showed them some other prints that our IT department had made to show off the different things the printer could do. This was probably the part the tweens got the most excited about!

Next, I went over the basic controls. I showed the tweens how to create the anchors and how to add/delete edges. Then I showed them how to use the Trace and Magic Trace features (Note: The Magic Trace tool doesn't always work. It depends on the image you choose.). I also showed them the Gallery and how to upload/alter someone else's design.

At the end of class, I went around and downloaded everyone's design to a flash drive to print out later. I also showed them how to create an account and save their designs for later if they wanted to. The entire program took about an hour. Here are some cookie cutter examples I created: 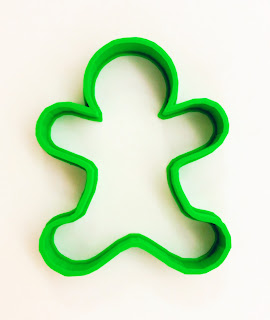 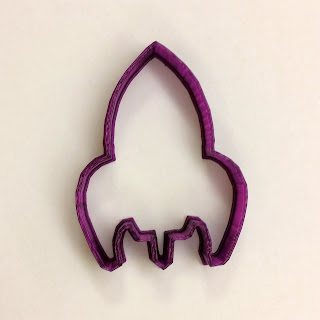 Unfortunately, the image search wasn't working, so I showed them how to find something on Google Images and upload it to the Cookie Caster program. I was hoping that more of them would create an original design freehand, but once they learned about the tracing option, most wanted to just do that instead. Oh well...

I chose to host it in December as a sort-of holiday program since baking and gift giving can be a big part of that time of year. I gave participants a choice of having their cookie cutter printed with red, green, or white filament. Our wonderful IT department then spent the next couple of days printing out everyone's design. I then notified everyone as their cookie cutters were finished and ready for pick-up.

Have you done a Cookie Caster program before? Or what other 3D printing programs have you done for tweens?

Posted by Kim at 12:09 PM No comments: Links to this post

Pizza and Pages: The Adoration of Jenna Fox by Mary Pearson Plot Summary: From Goodreads: "Who is Jenna Fox? Seventeen-year-old Jenna has been told that is her name. She has just awoken from a coma, they tell her, and she is still recovering from a terrible accident in which she was involved a year ago. But what happened before that? Jenna doesn't remember her life. Or does she? And are the memories really hers?"

Average Teen Rating: 6.85
My teens appreciated the story and the themes (which garnered some good discussion) but felt the writing as a whole seemed a little "young" for them. Also, some were reluctant to read it because of the cover and the tagline, which made it seem like a hardcore romance. This lead us to an interesting side discussion about book covers!

Lots of good discussion questions out there! I found mine here, here, and here.
Posted by Kim at 11:44 AM No comments: Links to this post

For the past couple of years, I decided to host a sort-of end of the year holiday party for our Anime Club meeting. We still screen anime, but we have some special activities to celebrate too:

My anime teens love bubble tea! It's pretty easy to do. I purchased black iced tea bags (such as these) and made the tea in a plastic pitcher the day before so that it's nice and cold for the meeting. I also set out the following: 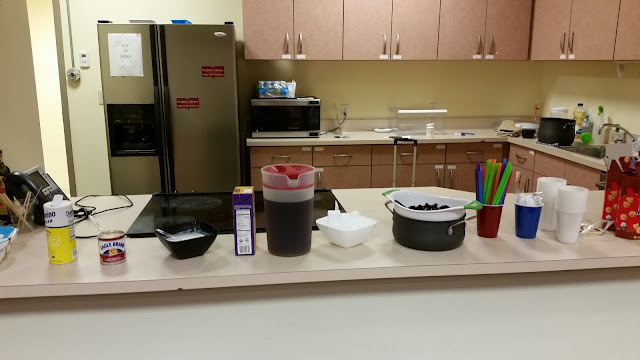 I tell the teens that the best combinations are black tea and condensed milk or chai tea and coconut milk, but that they can mix and match however they like.

Just for fun, I also set out some Hello Panda cookies, which went over really well with the teens.

I purchased some clear ornaments ahead of time. The day of, I set out the ornaments, mod podge, scissors, and discarded manga. The teens then could cut/rip up the manga and glue the pieces to the ornament using the mod podge. This was definitely messy, but fun! (And it's a great way to use old mangas!) 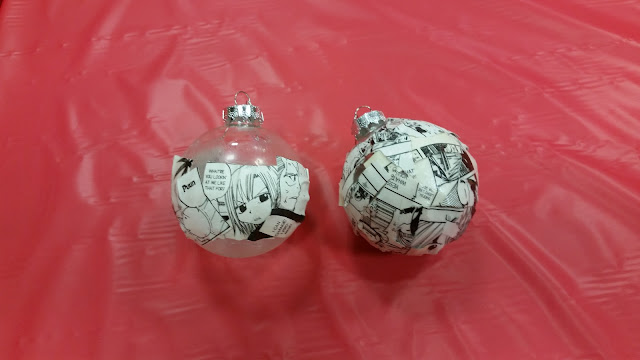 This was an optional activity for the club. If teens wanted to participate, they had to bring one volume of a manga wrapped up. Then we sat in a circle and played by the classic White Elephant rules.

Do you host a holiday party for your anime club? If so, what do you do?
Posted by Kim at 11:28 AM No comments: Links to this post